Reviewing a restaurant just a few weeks after I last visited and reviewed it feels a little strange to me. In the past (see Mark Addy), I’ve simply tacked a few comments about the revisit on to the end of the original post because there’s not much more I need to say – certainly not enough to write a whole new article.

But Kyotoya last night was the first meal I’ve had since setting up the blog where I’ve bothered to take pictures,* so I figured sod it, let’s give it a go!

There were two dishes I was desperate to eat on my second visit to Kyotoya: the shichimi chicken breast I adored so much last time and the spicy whole sea bass, which I’d heard good things about. Being a budding fatso and in the position of choosing food for the whole table of three, I also ordered the shichimi salmon and shichimi beef, and the house special fried rice and fried noodles.

The salmon arrived first, alongside a delightful beansprout salad. I’ve never used the word ‘delightful’ to refer to anything featuring beansprouts before, as I’ve traditionally considered them an abomination. But there was nothing soggy or gritty about this salad; nothing so stringy you could floss your teeth with it. This was just supremely fresh and crisp, and the perfect foil to all the meat we were about to consume.

The salmon itself was moist and full of flavour, but had a little bit too much soy sauce on it for my tastes. I don’t know what else to say about it, which probably says enough. I’m glad I ordered it, but I don’t think I would again.

Salmon shichimi, grilled in a garlic and chilli sauce

While we were busy eating the fish, the beef arrived, cooked nice and pink in the middle and with wonderfully crisp fat. Going off its appearance, I was expecting it to chew like a rubber band, but it was so tender you could pull it apart with chopsticks and it melted in the mouth. Unfortunately, it was salted to the point of mummification, which held it back from being the dish of the night for me.

The rice, noodles and chicken came more or less together. A wanton dusting of black pepper spoiled the rice to the point of unpleasantness, but the noodles – with prawns, salmon, bok choi and assorted veg – were lovely. The chicken was every bit as gorgeous as I remembered it; so succulent, so juicy, and so, so, so addictive. 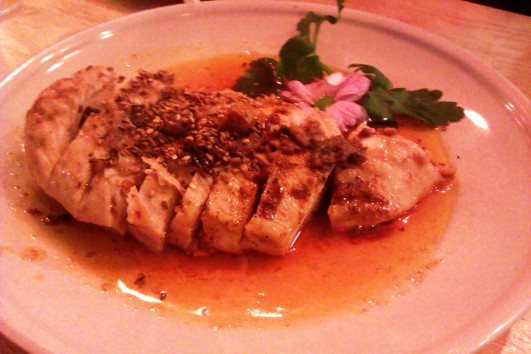 After we’d demolished the shichimi, it was time for the main event – the spicy whole sea bass**, which was stuffed with a leek, lightly battered and deep fried before being dressed with a spicy sauce. I don’t think there are many more exciting things in a restaurant than being presented with a whole fish to share, and this definitely looked the part: an angry monster fish, roaring up from a blood-red lagoon. Every diner in the restaurant turned their head as it was brought out; it was stunning.

If I’m honest, it didn’t quite live up to expectations. The meat was a touch overcooked and it didn’t pack the flavour I’m used to with sea bass. That said, the sauce was spot on and the crispy skin was incredible; there was a great big dose of happiness with each salty, crackly bite.

We’d eaten far too much food by this stage, but we still managed to polish the fish off, autopsying it until every shred of flesh was found and devoured. Despite the faults, I’m struggling to think of a single restaurant dish in Manchester which comes anywhere near this in terms of value for money. For £12, it’s an absolute cracker.

On the whole, this meal was a sizable step up from my first experience of Kyotoya. There were far more highs from the food and the lows were all fairly minor. There were no service issues to speak of and I’ve even grown slightly fonder of the dining room, thanks to a seat that allowed me to watch the kitchen and kept me out of the path of the hurricane winds which blow in under the door.

The improvements did come at a price. We visited at 6pm – too early for me – when the place was pretty much empty, and we spent around £6.50 more per head, although admittedly this was for far, far more food.

Nevertheless, I think it was a price well worth paying. Even at £20 per person, including wine and beers, Kyotoya is a bargain. And now I’ve revised its scores up, I make it the second best East Asian restaurant in the city.

I said this last time, but I’ll say it again – if you live anywhere near Withington, you definitely need to go.

*I should apologise for the standard of the images. I can assure you that in real life, the salmon didn’t look like the chicken and the sea bass wasn’t served on a plate of gore. At the moment, I’m just experimenting with photos using a crappy cameraphone. Once I’ve worked out what I’m doing – and whether it’s something I want to continue doing for my restaurant reviews – I’ll upgrade to a proper camera.

**Do bear in mind if you go and want the sea bass (they do a sweet and sour version as well), you’ll need to pre-order it.

Sometimes you come away from a restaurant struggling to work out where the meal went wrong. The food’s good, the service is good, the ambience is good – even the company is good – but the overall experience is pancake flat.

“Meh, it was OK,” you tell a friend when they ask you how it was afterwards – and you secretly hope they won’t press you to elaborate. Explaining why you don’t like something when you don’t really have a reason takes way too much effort.

Kyotoya, a tiny Japanese diner tucked away on a Withington side street, is not a restaurant that fits into this category in any way, shape or form. If truth be told, it’s actually the antithesis of all I’ve described.

Bear with me for the next few hundred words while I slag off the multitude of things it does wrong and try to explain exactly why it is that I can’t wait to go back.

Kyotoya reminded me a little of the cafe in Coronation Street, only Roy and Hayley have better taste in décor and they don’t arrange the tables to look like the aftermath of a fight between two sumo wrestlers. It’s small and drab and student canteen-y and if you end up sitting directly in front of the door like I was, you’re going to need to wear your coat for the duration.

The ‘service’ on offer made a mockery of the word. Each person’s dish was brought out separately, with what seemed like an age in between. My sister-in-law’s plate of six dumplings was empty by the time my sashimi platter rolled out. If a pregnant lady was this late she’d need to be induced.

The only thing you could rely on with the service was that the food would turn up at least 10 minutes after you started wondering how long it takes for starvation to kick in. Over the course of the meal we learned if you want something from the staff, the only way of getting it is to stand up, walk over to the counter and ask. If we’d waited for them to do the rounds, I think we’d still be there now, a week later, dying of malnutrition.

There were a few problems with the food as well. The tuna and salmon sashimi lacked flavour, the latter so much so that it tasted of nothing at all. My seafood yakisoba could’ve been named a vegetable yakisoba for all the fish it contained. Two rings of octopus, two small prawns and some incredibly tiny pieces of tuna do not a seafood dish make. You get more in a Spar economy fish pie.

Yet, while any of these issues alone would normally have me vowing never to return to a restaurant, and all of them together would typically leave me seething, I exited Kyotoya with a big smile on my face, looking forward to my next visit.

Why? Well, first off, besides the above, some really great food was put down on the table. The octopus sashimi was excellent; sweet, succulent, sublime. The prawn sashimi was almost as good; fresh as a daisy and gorgeous with a bit of pickled ginger and wasabi.

Chicken dumplings and salt and pepper spare ribs were several cuts above anything you’d expect to find in a joint like this. The noodles – between us we tried three different types – were all wonderful. Even the veg that dominated my yakisoba was good. The freshness of the ingredients and the clean way they’d been cooked – there was nothing greasy at all about this food – made me very happy indeed.

The star dish was chicken with garlic; a chicken breast that had been marinated – perhaps even poached – in coconut milk, with a garlic and soy dressing. It was beautifully moist and incredibly moreish and I was extremely envious that it wasn’t me who’d ordered it! It’s the best bit of chicken I’ve had all year.

The second reason I’ll be heading back is because it was so easy to put the service issues down to a culture clash and take them with a pinch of salt. The staff were supremely friendly, polite and generous. Asked if we could have another bottle of white wine, they said they only had a quarter bottle of it left, but we could have it on the house. While we sat waiting for the bill, they wheeled out complimentary plates of ice cream for us all. Small gestures, but ones that made me feel very welcome.

The third and final reason is the price. It was dirt cheap. The bill was the sort that makes you open your eyes wide in disbelief before checking through to make sure nothing has been missed off. 14 dishes (including the ice cream) plus a bottle and a quarter of wine and three beers came to £67.50. That’s £13.50 a head, a total steal given the quality of some of the dishes and the portion sizes. They gave the five of us more food than we could eat.

Kyotoya probably isn’t a place worth going out of your way for – I couldn’t imagine anybody coming away from it thinking that they’ve had a really special meal. However, the food is so good in parts that if you live in the area, you should definitely make the trip. At the very least, give their takeaway service a spin. If I lived around the corner, I think I’d be there every week.

Manchester’s not particularly well known for its Japanese food, but with certain dishes, Kyotoya might just produce the best the city has to offer.

And it does so at prices too good to miss.

(I revisited Kyotoya a few weeks later and upgraded its score. You can read the latest review here.)