There were no fat old ladies this time around; no suspicious shop assistants either. There was no long deliberation process by a scruffy man.

As I walked back into the Harvey Nichols food section I knew precisely which chocolate bar I wanted and I’d had my hair cut. That’s 200 words of preamble saved through research and an £8 trip to the barbers.

I’d been tempted by the El Pedregal 2011 Vintage, 64% on my first visit; held it up against the other Valrhona bars and mmmd and ahhhd. The packaging was good, the blurb was great. It looked so much better than the chocolate I actually bought and the price suggested it was too, approx £6.50 for 75g versus £3.99 for 70g.

I swooned at the idea of a ‘vintage’. Of course it’s a gimmick but like any good one it still appeals once you’ve seen right through it. There are few meaningless words capable of stirring up such irrational feelings of lust.

El Pedregal was left on the shelf on the first Valrhona buying trip simply because I was being cheap and wanted to try three different bars instead of two. Having read a couple of decent reviews of it online, there was no question of that happening again. Valrhona’s champion had been chosen and it was time to put it to the test.

The El Pedregal 2011 Vintage was a much more conventional-looking bar than the others I’d tried previously, and classily dressed. Appearances matter with ‘luxury’ items and between the smart exterior and golden foil wrapper, it all looked reassuringly expensive.

Chocolate lovers bang on about snap and smell, and to my novice ears and nose there were no letdowns here either. The aroma was strong and spicy; attractive in a way that makes you want to actually eat the bar rather than keep sniffing it.* The audible thunk it gave when I broke off a piece was as rich and assured as that of a car door.** 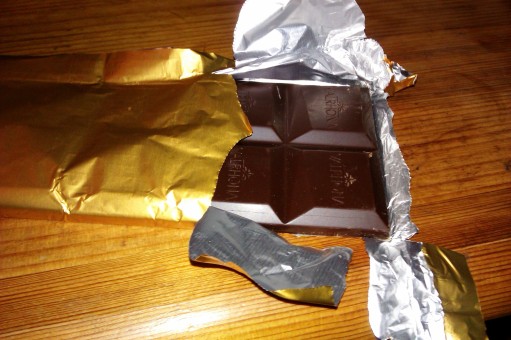 And the taste was complex and interesting. With every chew came a different wave of flavours – dried fruits, coffee and liquorice, to name a few – all complemented by a wonderful melting texture, far superior to that of any other bar I’ve had.

The different flavours kept coming for several seconds after I’d swallowed. It wasn’t a Dom Pérignon-level epic finish, but impressive nonetheless for a bar of chocolate. I certainly didn’t expect it to linger so well.

Yet, for all the intriguing things going on with the El Pedregal as the taste continued to develop in my mouth, I found myself waiting for one crucial component that never arrived. The key element I needed before I could declare Valrhona chocolate a winner:

It’s difficult, but the best way I can think to describe it is to imagine you work in a highly specialised industry where it’s important to keep up to date with the latest trends. Something big happens, so you set aside some time and read all about it. It’s interesting in a professional sense – you lap it up because change is always exciting relative to the general mundanity of your job.

But outside of work you don’t read about it, you don’t talk about it, you carry on as if nothing has happened. And you do this because there’s no enjoyment to be had. Without the context of your employment, it’s too boring to mention.

And that’s just how the Valrhona El Pedregal 2011 Vintage was for me. It’s undoubtedly a very fine bar of chocolate and it was fun to try in the sense of ticking an item of my Foods To Try Before You Die list. But in the sense of everything else, it was really, really dull. If I didn’t know I was going to write about it, I’d probably have forgotten the details along with those of the lesser Valrhona bars.

It’s sad but I think that’s probably it now for me and straight chocolate. I’m still open to ‘chocolates’ (as in ‘a box of’) but I definitely can’t imagine spending good money on a high-end bar again – Valrhona or otherwise. I just don’t seem to get them, and can’t seem to take any enjoyment from eating them, so what’s the point in buying them at all?

It’s possible I may come back to this in years’ time, as my palate develops and different flavours become more appealing to my tastebuds. But right now, you can forget about foods to try before I die – chocolate is a food I could quite happily never try again.

NEXT UP: Victorian mince pie

*This is unlike a lot of brandies, and also Tic Tacs, where the aroma rather than the taste comes across as the main event.

**A slightly groan-inducing image, perhaps, but one that I can’t seem to shake. I find it amazing how much effort goes into ensuring a car door makes the right sort of sound when it closes. Left to their own devices, you’d get quite a tinny noise when slamming a metal door shut, which isn’t something people associate with safety and security. So they engineer the doors specially to make a more robust sound which people are more comfortable with.

I’m sure Valrhona don’t spend millions on this like the car industry does, but the sound the chocolate makes when it breaks is clearly an important consideration when they go through the tempering process.

Posted in Foods To Try Before You Die

“What is he doing?” the fat old lady probably thought as she past the scruffy bearded bloke for the third time. He’d been stood in the same spot in the confectionary aisle for well over ten minutes, forcing her to turn sideways and squeeze her ample frame through as she waddled around the shop filling her basket.

She wasn’t alone in noticing – or scowling at – the man, who kept picking things up, staring at them, then putting them back again. The Harvey Nichols staff were peering over too, undoubtedly trying to make sure that nothing fishy was going on, and wondering whether he was ever going to buy anything.

After a while one of them decided enough was enough; let’s see what this fella’s up to, said the steely look in her eye.

“Is there anything I can help you with, sir?”

“No, I’m fine thank you,” was the reply. “I’m just really struggling to make up my mind!”

Satisfied that he was neither loony nor thief, the assistant went back to her till and the scruff’s gaze returned to the rows and rows of Valrhona chocolate that had him so entranced.

It was another five minutes before a decision was made.

Plenty of Michelin-starred places wield the Valrhona name as if it’s the ultimate in quality. Make a dessert using chocolate from another manufacturer and it will simply appear on the menu as a ‘chocolate dessert’; make it with Valrhona and all of a sudden it becomes a ‘Valrhona chocolate dessert’.

An example of a ‘Valrhona’ chocolate dessert from the menu of Michelin-starred Northcote Manor. The typo’s slightly unfortunate, but it still makes my point.

More than any other, it seems, Valrhona’s a brand that chefs are proud to show off.*

I’ve mentioned before that I’m not the biggest chocolate fan, but given the widespread veneration for Valrhona, I couldn’t help but place it on my list of Foods To Try Before You Die. Annoyingly, what I hadn’t really thought about until I stood there agonising over a shelf in Harvey Nichols was whether a standard chocolate bar could be a true representation of what’s so good about this company’s products.** And, if it could be, which one should I choose?

I eventually decided the best I could do was just buy a range of bars and rate the lot.

I’ve had a couple of underwhelming experiences as I’ve worked my way through The List over the last year or so, but the Guanaja, 70% really dropped the bar to a new low. It looked and smelled the part, even had a texture that wouldn’t be amiss in chocolate of real quality. But the flavour was virtually non-existent; in depth terms, flatter than a witch’s tit. All I could make out amid the dry, nothing taste of cardboard was a single bitter tone – cheap and unpleasant.

“Don’t worry, you’re not missing anything,” I told my dairy sensitive wife, who’d been very jealous about me conducting a taste test in which she couldn’t partake. “Fucking Bournville’s better than this.”

With a sense of dread starting to set in, I moved on to the Manjari, 64% – a significant improvement in the taste department, although still remarkably unimpressive. If it was Taste the Difference, you’d think Sainsbury’s had lowered their standards – that’s about the level we’re talking here. 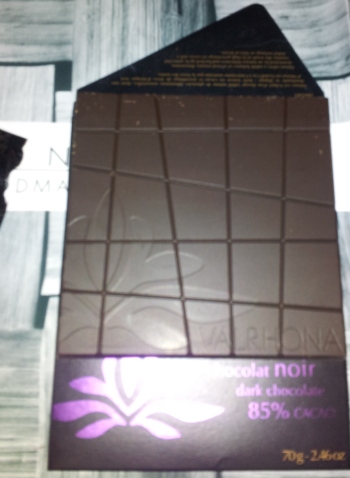 Finally I turned to the Albinao, 85%, praying that it’d be the chocolate bar to make all that agonising worth it; to make the £12 or so I’d spent worth it. This was even better still – about as good as a bog standard bar from Green and Black’s.

Oh god what a waste of time. What a waste of money! How little I’m describing each bar is testament to their quality. They were just immensely bland and forgettable; overpriced and an embarrassment to the supposedly prestigious Valrhona name.

I started writing up a blog post to lament the experience; to express my disappointment at Valrhona’s rubbish offering. I got about half way through my vitriolic rant before deciding something wasn’t quite right.

I figured that even if chocolate bars aren’t their main strength, a company as well-regarded as Valrhona can’t be all crap. Perhaps I just got unlucky with the bars I chose? Maybe my palate just wasn’t in the mood that week?

After some thought, I decided I’d give Valrhona chocolate one last chance at redemption. I’d go back to Harvey Nichols, buy another bar and see if it couldn’t change my mind.

The El Pedregal 2011 Vintage, 64% was picked as the company’s final champion.

*I had to laugh when a few days after writing this paragraph I received the menu for a friend’s wedding which listed this as a dessert option:

I picked a fresh berry pudding instead.

**I have very loose rules about trying to be fair which you can read in my FAQ.

Posted in Foods To Try Before You Die