I received an email through today from the fine people at hangingditch wine merchants, revealing that I, along with around 200 others, had done spectacularly badly in the blind taste test they were running at Manchester Food and Drink Festival’s Big Indie Wine Fest over the weekend.

My excuse for only getting two out of the six wines right and therefore not winning whatever the hell the prize was (was there one? Things got a little bit hazy around that point of the afternoon…) is that I’d probably consumed well over 50 wines in the preceding three hours of constant drinking and as such my tastebuds were well and truly buggered.

If my ability to discern flavours beyond alcohol is not a strong enough justification for my complete and utter failure, then prepare to be shocked when I reveal that I was also a little bit drunk.

You see, I firmly believe – and I hope you all agree with me here – that spittoons are for the weak. 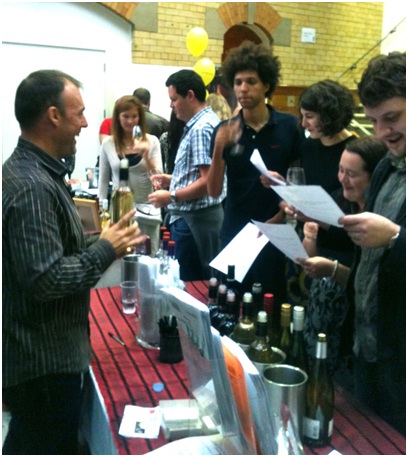 A picture from the aforementioned hangingditch email. Is it me, or is there something slightly familiar about some of the people on there?

Despite being a budding oenophile, I’ve never been to a wine tasting or any other wine-related event before. The Big Indie Wine Fest at the People’s History Museum was my first bash at it, and it was absolutely fantastic.

For £10 entry, my three companions and I were able to try dozens and dozens of wonderful and interesting wines and meet several wonderful and interesting vendors (plus the odd dickhead). While there were inevitably quite a few mediocre bottles knocking around, the standard was mostly very high and with plenty of the typically £10-£12 wines living up to or exceeding their price bracket, there’s no doubt that I got my money’s worth in booze.

We were given a tasting glass and a tasting guide as we walked into the hall where the wine festival was taking place. There were more than a dozen different stalls set up around the sides of the room, each with anything from two to 12 different wines to try. All of them had a spittoon next to them (for the WEAK! I said) and the good ones had water available as well.*

Anybody thinking they would never go to an event like this because they’d expect it to be intimidating, whether it’s a fear of not knowing enough about wine or some misplaced feeling of class inferiority, should think again. All four of us rocked up scruffy as you like and nobody batted an eyelid. The most knowledgeable member of our group (me) would fit quite firmly into the category of ‘wine novice’, while the least knowledgeable would come under ‘I don’t like wine, I think it’s rubbish’.

Yet, to a man, we had a brilliant time. Even the wine-hater found plenty to enjoy after I suggested red might be a little more to his tastes. Once we got over the initial few minutes of “I don’t have a clue what we’re meant to be doing”, it was pure gold.

Without a doubt, I’ll be going to more of these things in the future and I’ll be recommending this event in particular to anybody who’ll listen. Seriously, you should give it a try – I doubt I’ll spend many better tenners this year.

Three vendors stood out above all the rest, so I’ll give them a bit of attention here:

Origin Wines (Taste Buddies) – All the wines on this stall were from small producers based in Italy, France and Spain and you could taste the care that went into each and every one. Several were brilliant, those that weren’t were at least interesting, and along with every single one the charming scouse bloke behind the stall was able to give us stories and jokes that helped to bring them alive.** Particularly memorable was just about everything made by Luigi Giusti, or “my mate Giavanni”, who also did a wonderful extra virgin olive oil. I plan to buy a lot.

Pacta Connect – Regretfully we only came to this lot right at the end, but the lady behind the stand was fantastic and made sure we got to taste all the Croatian wine they were offering before we got kicked out. I’m sure I’ve never had Croatian wine before, but even to my then knackered tastebuds, there was something new, exciting and refreshingly different about the bottles on this stall. I’m eager to try more.

Porto Vino – Not everything on this stand worked – I summed one up as tasting like “wet dog” – but when the wines did it screamed value for money. I promised my wife I’d buy her a bottle of the magnificent Moscatel de Setubal Sivipa dessert wine and we’re seriously considering foregoing the usual bottle of Champagne on Christmas morning and quaffing a sparkling Quinta da Romeira instead. At £15, it was a third of the price of the cheapest Laurent Perrier being poured on the other side of the room and it wiped the floor with it.

*Water is a must for this type of event. The tasting glass will get pretty dirty once a few different wines have been poured into it and if you don’t want to spoil the drinks coming up with remnants of those already consumed, you’ll want to be able to wash it out regularly over a spittoon (for the SMART!).

**The Origin Wines man was doing a masterclass that evening, which you had to pay extra to get into. I’m pretty sure we got a good dose of it for free at the stand.